An educational establishment in North London already had fixed air conditioning installed, but wanted to extend it to several classrooms which currently had no room air conditioning.  The school had  received a substantial  quote for the extra  cooling  units which meant they would need to generate additional funding, so in the meantime they were looking for a temporary solution.

Our Business Developer visited the school to carry out a free site survey and to demonstrate two evaporative coolers.  The school had requested a Honeywell FR48 but as this was likely to be too noisy in a classroom,  our BD also demonstrated the Munters CCX 2.5 which was a much quieter option.  The Honeywell produces approximately 65Db of noise, compared with the Munters running at 54Db, and with a normal speaking voice measured at 60Db, the school found the Munters CCX 2.5 to be ideal.

They subsequently ordered eight  units which we delivered the next day. 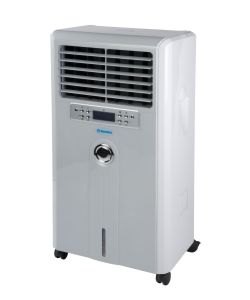